Neil Gaiman (co-author with Terry Prachett of “Good Omens” – a book I thoroughly enjoyed both times I read it) has a blog. It is well written, funny and well worth reading and covers his experiences during his promotional tour and book signings for his new book “American Gods“. He is currently in the US, but has book signing dates booked in the UK and in Canada in July.

Are you into Big Brother? Would you want to take part in something similar? If so, take a look at Little Sister. This will be 4 people living in a 17 foot caravan in Docklands for 4 days. The winner will win an Alfa Romeo sports car, and will be voted for by visitors to the web site. So, do you fancy taking part, or watching one of your friends? If so, then nominate them or yourself and then sit back and watch.

I went to see “The Dish” at the cinema the other night. It’s an Australian film, based on the story of how the radiotelescope in Parkes, Australia relayed the moonwalk to 600 million people. I wasn’t sure how true to life the film was, but the “On Eagle’s Wing” site seems to agree with most of it. That site, which is the Parkes view on things, makes quite interesting reading actually.

It’s a good film, not in the same league as “Strictly Ballroom” or “Muriel’s Wedding” but good nonetheless. (and those 2 films are personal favourites anyway).

I went with some friends from work and we watched it at the Warner Village cinema in Leicester Square. The Odeon was booked out and yet, less than 200 metres away we were the only 3 people in there for the majority of the film. It felt a bit like being a VIP.

After the film 2 of us went to “Pizza Piazza” for some dinner. This was pleasant and not too busy at all considering it is just around the corner from Leicester Square on Charing Cross Road.

I receive mail from the Alt-Kite (Alternative Kite) mailing list on yahoogroups and received an article this morning about the usage of kites to raise an obelisk. One of the enthusiasts, Maureen Clemmons, has posted to the group before. Today’s article says:

“Researchers used a mammoth kite Saturday to set a 6,900-pound obelisk upright, a feat they say demonstrates that ancient Egyptians may have harnessed the wind to move even the most massive of stones. It took two tries but less than five minutes before the reinforced concrete obelisk, which had been prone on the ground, was raised by the tug of a brightly colored parachute modified to fly like a kite in the stiff Mojave Desert wind”.

Interesting idea eh! Seems that the progress this group have made to date is impressive. The concept behind it all makes pretty interesting reading too.

Other related articles are from Time.com from December 6 1999 and from dailynews.com from June 4 2001. For more information, visit the Archeologee website.

We spent this afternoon at the Middlesex Show. As well as having the usual stalls, it had a small farm exhibit with donkeys, turkeys, ducks and other such hot looking animals, it had a stage with an atrocious singer on, and it also had some equine events. We watched some of the Scurrey racing but the highlight for us was probably watching the Cleverdogs events. We’ve seen this sort of event at Crufts (shown on the tv) before and this time we got to watch it for real. It was a really hot afternoon, and by the time one of the dogs
made it into the 3rd/4th place playoffs in the Division 1 event, the poor thing was just too hot to really be bothered. The dogs and handlers work really hard and they produced an excellent show for the spectators.

There are more photos here

Never watch a film that you know the ending of. That’s usually Richard’s view of films. I don’t agree with that totally, as it is often interesting to see how the book gets interpreted. Bridget Jones’s Diary is a book I read many years ago, and enjoyed (in a light reading kind of way – I read it on a flight to Kenya). The film is pretty well put together, and flows along nicely. It was interesting to see how you can turn a book written as a diary into a film – it handles it well. It’s a fun film, no deep meaningful experience, but fun. I enjoyed it, it made me laugh.

Well, I watched the eclipse on the BBC site. It has to be said that a live web feed isn’t quite the same as being there, especially when the camera ran out of battery power, but it was still a pretty impressive sight and I’m glad I watched it. The BBC have already put some pictures up on their news site and I’m sure more will appear very soon. Watching the eclipse brought back some great memories of our trip to Hungary for the last one, and made me think about trying to see another one sometime. 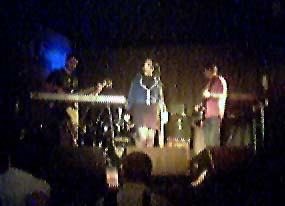 Last night, at the Half Moon pub in Putney, a friend’s band took to the stage: headlining for the first time. They’re called Hostess.

What sort of music? “Hostess combine glorious trip hop beats with delicate melodies to refresh your soul.” You can listen at http://www.hostessmusic.com/music.html.

There is a total solar eclipse tomorrow in Southern Africa and Madagascar. The BBC claim to be doing a live webcast of it so that will be how I watch this one. The Maximum moment is at 14:11 (British time). At the time of the last total solar eclipse in August 1999 I was with Richard and our friends Paul and Tess at Lake Balaton, Hungary to watch it. It was a fantastic experience, and I would still love to go and see another one. It was a totally awesome sight to watch the sun disappear, and it was easy to see why ancient cultures saw it as a prophesy of doom.

La Mancha on Putney High Street, London has a good selection of good quality tapas, all served in a relaxing atmosphere – if you don’t look out of the windows and see the London buses go past you could almost believe you were in Spain. Last night our tapas choices were: Patatas Bravas (an obvious choice), paella, Scallops wrapped in bacon and served with lobser sauce, Lamb kebabs and an avocado, mozarella and tomato salad. All of which were very tasty, and all washed down with a couple of San Miguels.