Warning! You may find britishpathe.com addictive.
Just browse their archive of film from the 1896 to the 1970s by hitting the “Lucky dip” button.
I’ve just been looking at images of Brighton’s West Pier from 1933. The preview of the clip gives you
some descriptive text, but to actually view the movie you need to fill out a form and then download
the (Windows) media file. The very low quality preview is free (oddly they email you an invoice)
and has a seriously annoying “(c) BRITISH PATHE PREVIEW ONLY” banner stuck 2/3 of the way down the screen for the whole movie.
Still, you can splash
out and buy the high-quality version if you really wanted to.

We went, with Simes, Steff and Daisy, to Les Arcs for a weeks snowboarding holiday. Richard and I had only ever been on a snowboard once before, and that was indoors at the Tamworth Snowdome. So we weren’t expecting much from our ability. What we discovered was that real snow is much easier, even than the stuff they have at Tamworth. By the end of the week we’d managed to traverse our way down a couple of runs reasonably successfully, and even managed to link some turns together.

Accommodation:We stayed in Les Alpages du Chantel, self catering accommodation with a balcony, 2 bedrooms, and a well equiped kitchen area (it even had a dishwasher). It is Ski-in/Ski-out accommodation, but it’s hard to snowboard to as there is a long flatish run, which is hard to get enough speed up for (especially when you’re spending most of your time on your bum).

Piste:Les Arcs have a lot of runs to choose from, and seem to have a good distribution amongst abilities. We spent most of our week using the Chantel chair lift, and snowboarding down the two runs that run parallel (and have cut-throughs from one run to the other). Hint: after fresh snow there’s a lovely powder field just below the cable car terminal. The only other run we did was Charmettoger, but this proved tricky in parts for learner snowboarders due to long flat parts, and was really busy as several runs merged together at a couple of points. Check out the piste map.

Food and Drink:We ate in most of the time, and found a couple of supermarkets in Charvet which were reasonably well stocked. One of them, Sherpa, will deliver if you spend over 80 Euros and so we did that. We ate out a couple of times, once at a creperie and once at a Tex Mex place – both in Charvet, both pretty good.

Equipment Hire:We’d arranged our equipment hire through our tour operator and could go to any of the local branches of Ski Set. The equipment we got was really good quality, mine was a Burton board and bindings, and Rich had a Salomon board and bindings, and we both had Salomon boots. Another time I might buy some boots so that I could be sure of a good fit, but I’d still hire a board as it seems much easier than lugging it around an airport.

Getting around:There is a free bus that runs between Charvet and Chantel (and so serves Les Apages du Chantel). There is also a bus that runs between Charvet and the main centre of Arc 1800, and also down to Arc 1600. We never left Charvet, although Steff had to venture down to Arc 1600 to file a police report for her missing snowboard (she put it onto one of the buses and it wasn’t there when she got off – make sure the carrier at the back has a chain on it before putting your board/skis on!).

Getting there:We flew to Lyon, which is a 3.5 hour coach ride away. Geneva is closer, and Chambrey is closer still (although the reps told us that Chambrey often has long delays). The Eurostar goes from London to Bourg St Maurice on a Friday and Saturday during winter as an overnight service.

The first batch of photos from Les Arcs are up now. We haven’t even finished one of the films in the APS camera yet so the photos of us actually doing some snowboarding will have to wait a while, but here are the scenic/general photos for now.

So, it looks like the people at FriendsReunited have come up with another idea. They’ve launched GenesConnected, a genealogical record site. So, you enter your family tree information and share it with other users. You can add your ancestors, and then search through other people’s trees to look for matches. If you find a likely looking match, you can email the contact and share your information. It has the same charging fee as FriendsReunited, so it’s a fiver per year. And from what I remember about genealogists, this won’t be a hard sell…

So, whilst we were on our holidays another bit of the West Pier collapsed. Looks like we lost our opportunity to do a tour of it then! Bah!

Update: Just found these photos. It looks like the front (land part) of the pier has squashed even more.

I’ve just been playing with some of the holiday photos, and the above is one of two panoramas I took from the balcony of our apartment – yes, really, that is the view we woke up to last Sunday morning. Lovely!

Well, we survived our first snowboarding holiday. We went to Les Arcs, France and had a wonderful time.

No real injuries to speak of, a few bruises and blisters, and a lot of aching muscles but other than that it was a real success for us (less so for Simes and Steff who didn’t get as much snowboarding in as Daisy wouldn’t settle in the nursery). We concentrated on a couple of runs, and got used to the terrain so that we could learn new aspects rather than spending all our time wondering what we were going to have to deal with next.

We’ve had a cracking weekend. A bit of light shopping yesterday afternoon and then off into London (well, Elephant and Castle to be exact) for a birthday/house warming party for Heather. The theme was a children’s party so there were sandwiches, sausage rolls, fairy cakes as well as party games – like pin the tail on the (very depressed looking) donkey, and pass the parcel. Excellent idea!

Today we headed off on our first bike ride of the New Year, and it was hard work. The track we often cycle along was frozen so it was a bit like riding a boneshaker at times. Still, it was nice to be out in the fresh air, and it was a beautiful sunny day down here. Shame me and my bike parted company on a particularly muddy bit… Then we met up with one of our friends for Sunday lunch at The Regency Restaurant before stopping to take some photos of the sky at sunset. Then finally, on to see some other friends for tea. An unexpectedly lovely weekend. 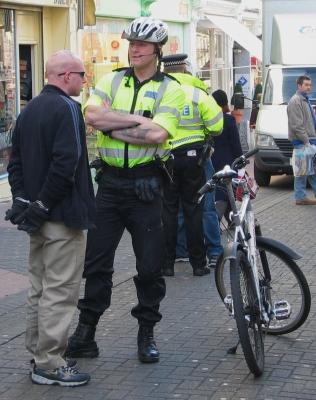 There we were, just walking around the streets of Brighton when we came across this scene. As I had my camera with me I thought I’d take a quick snap of it. 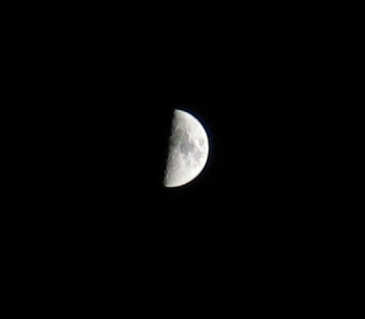 After Tuesday’s poor attempt at moon photography I decided to find out a bit more about it and read an article on photo.net, one on dpFWIW and got some advice from the forums on dpreview. So this evening, as I left the office I decided to try a few of the suggestions. I’m planning to experiment with a few other settings next time, but I’m much happier with what I got here.