The
t-shirt folding video is life changing. You can read the instructions that go with it, if you want.

It’s the run up to Christmas, and so on Saturday we headed off to the Cite Europe shopping centre in Calais to stock up on cheaper booze (with hundreds of other brits judging by how busy the place was).

We used the Eurotunnel again, and again were impressed with it. The fact that it is less than 5 minutes from the terminal to Cite Europe is pretty handy too and even the return trip only took us about 20 minutes (although you do wonder where they’re taking you as you can see the terminal from the East Car Park).

We bought most of our alcohol from Tesco – using the Superplonk data to work out what the best deals were. We managed to track down enough to keep us going for a while anyways. One thing we noticed was that Tesco’s do an ordering service – we might give that a try next time.

We stopped for lunch in Le Moulin a Biere (getting 10% off because we’d been to Tescos) and then had a good wander around the rest of the shops, and finished off in Carrefour buying some cheese, and a few more bottles of wine.

We went to a lecture about the history of the West Pier last night which was very interesting. Jackie Marsh-Hobbs has a great selection of photos from its past (She is willing to do these talks for free to interested groups). I learnt quite a lot about the West Pier, and piers in general including that they used to do Bicycle diving from it (until someone died), it had mines put on it and all along the beach during the Second World War and it had a rifle range which used live ammunition. We bought a copy of Walking on Water by Fred Gray to learn more about the historical story of this once beautiful structure.

One of my regrets about the West Pier was that the first summer we lived in Brighton, they did the last hard hat tours of it for £10. That would have been quite an experience, but as with a lot of things we put it on the “we’ll do it next year” list.

I more or less live on a major shopping street, which means I’m constantly being stopped by paid charity fundraisers.

I didn’t know they were called chuggers (charity muggers) until recently. I also didn’t know that the charity can end up with as little as 10% of the donation. The main thing that annoys me (yet also interest me) is the polished psycho warfare they use. I’m sure they have some pretty interesting training sessions, and I’ve also no doubt that someone has said that, in this modern thrusting world, the charities need to deploy the heavy sales approach. But the thing is, us consumers are getting smart to that. The chuggers don’t seem to go in for supplying a guilt trip. It’s now all I’m-your-friend handshake-handshake smile-smile. Or (from a male perspective), when you tell a female chugger that, no, I don’t have time to stop right now, you get a drop of the hip, tilt of the head, finger twirling the hair, “that’s a shame” response. Gee… either I am irresistible or — and I think we have to consider this as a realistic option — it’s just another nasty sales technique.

So apologies to any chuggers that approach me: you’ll get a polite but firm “no” just as a matter of principle regardless of your charity. I considered making a t-shirt to that effect, but realized it’d only attract them.

Cheeky Films are looking for photos of the pier for a film that will be completed early in 2005. Send in your photos, paintings etc. 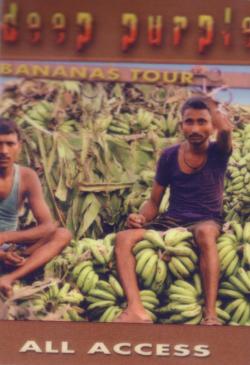 Dave was in town on Tuesday, working, taking photos for
Deep Purple at their penultimate gig (of the current tour) at the Brighton Centre.

Now, Deep Purple isn’t really something we’d go to see, but Dave was in town so we were going to go along and get the Rock experience. And besides, Dave conjured up backstage passes, making it a no brainer. (We’ve now been spoilt: insist on access all areas passes for all gigs you go to).

Deep Purple put on a good show, although we’re not the people to ask, knowing only
one song, but there were plenty of people seriously enjoying themselves. It was a good experience, especially being at a gig where you’re really not overly bothered by the music: you can just experience the whole thing, detached from the event as such. Odd.

Back stage (the Brighton Centre back stage is not Rock and Roll) there was some kind of meet and greet. A group of about thirty people gathered in a room, and all were Big Fans, probably having followed the tour round the country or the world – apart from us imposters, of course. When the band showed up for photographs and autographs, we were really feeling like phonies. But the band spent quite a lot of time, making sure they worked the room and got round to see everyone. We had a chat with a couple of them, and they seem like good blokes who obviously really enjoy what they do. Impressive.

It was 3am before I managed to drag Dave away from Hotel du Vin bar…quite a trick, as that bar does stock some good beers.

The Brighton Film Festival starts on Friday with a showing of Vera Drake at the UGC in the Marina. Some interesting looking films amongst the selection.

There’s a nice report from The Economist on the music industry. According to some, less music is being bought. Could part of the reason be a drop in the quality of music?

How do you to measure something as subjective as that? I can’t think of an easy way, but the Economist suggests looking at the success of live tours and the number of albums sold by an artist – these measures would give you an idea of the longevity of artists, which might point towards quality. The conclusion is: “Many recent singers have toured less and have often faded quickly from sight”.

The graph drawn from the opinions of Rolling Stone readers supports this, but it may be that the kinds of people drawn to Rolling Stone magazine tend to think the best albums were written around the 70s. I don’t know – I don’t read that magazine.

It’s an interesting article. I’m probably buying more music that ever, but I’m definitely buying more singles (due to iTunes music store). “The boss of one major label estimates that, while catalogue accounts for half of revenues, it brings in three-quarters of his profits. If the industry stops building catalogue by relying too much on one-hit wonders, it is storing up a big problem for the future”.

We headed over to Lewes for the Bonfire celebrations on Friday – it was a pretty chilly night but we stuck around long enough to watch the processions before heading home to warm up with a lovely pecan pie treat. I took some photos, but at the moment they’re still in a processing queue – so, if you want to see what its all about there are photos for 2003, 2002 and 2001.