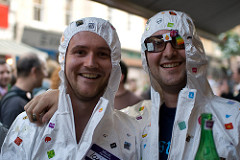 On Thursday Richard and I headed off into London with a load of other Brighton geeks to Moo’s Hot and Sticky Party. Richard managed to attend another moo party earlier in the year in San Francisco and after hearing about that there was no way I was missing out on this one. This party was to launch another new product – sticker books and we got to take away samples (as well as stick them on each other, moo employees etc etc).

We met some new faces, put faces to names (especially Will and Tom who I’ve known of for years but weirdly never met) as well as catching up with someone I haven’t seen in over 5 years.

A great party put on by a company who obviously know how to celebrate! I even got 2 photos included in the moo blog post about the evening. More photos. 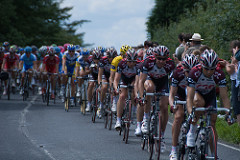 Our weekend revolved around the Tour de France. On Saturday we headed into London for the Prologue. We arrived at Victoria and wandered along to Hyde Park with the intention of soaking up the atmosphere, watching some of the time trials and investigating the People’s village. 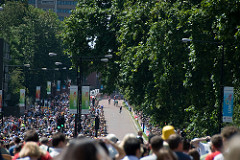 Our first observation was just how busy it was. The cyclists were out warming up around the route, and so as we walked along South Carriage Drive we watched the cyclists whoosh past. The last cycle race I saw was when I was a child and the milk race came to Hull. My memories from that day were just how fast the cyclists were, but I imagined I’d overestimated this in my memory. Not so, admittedly this was a time trial, but it was amazingly fast. We spent 2 or 3 hours in the park before heading back to Brighton, just in time to watch Fabian Cancellara’s winning ride.

On Sunday we headed off with friends into Kent to Iden Green and found ourselves a spot near the road by The Peacock. We arrived really early and watched more and more people arrive to watch both the caravane and the race later. The riders were amazing to watch (albeit briefly). The breakway group of 5 were followed by at least 10 vehicles, possibly more like 15. The main group came along 4 or 5 minutes later. 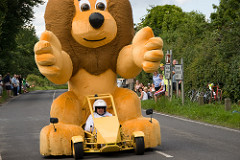 A great couple of days, and quite a spectacle. Looking forward to it coming back to the UK again soon but in the meantime I’ll have to make do with the ITV4 coverage and the ITV and BikeRadar podcasts. More photos 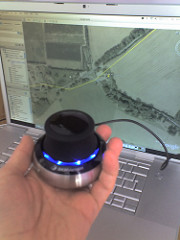 A month or so back I was given a SpaceNavigator (let’s not go into the details, but let it be known that sometimes just turning up means people give you things). My initial plan was to eBay it, but it turns out these things are too cheap to eBay, so I decided to open it up and plug it in.

I’ve used with Google Earth (which is the only supported application I have), and I like it a lot. You don’t hold it in your hand (as my picture might suggest), but plonk it on the table and use twist, push, pull and turn the device to control Google Earth. It’s a much nicer experience than using the mouse and onscreen navigation.

Now if only they’d add support for Final Cut: it’d be great for scrubbing through video and marking in and out points.