I was having a conversation with Alex earlier, and we started talking about collective nouns. My personal favourite is still an “ostentation of peacocks”. We found various online resources (Animal Groups, and of course Wikipedia has something to offer) to ponder and discussed how much some of these words really had anything to do with the object being collected – an “aurora of polar bears” for instance.

Wikipedia also offers collective nouns for job types as well, offering among others a sulk of developers. We’d already been thinking of terms for developers, designers, project managers and the other disciplines we have here at work and came up with a “creation of designers”, “list of project managers” and the fairly obvious “Victory of Madgexians” (paying homage to the Madgex Arms of course).

Any suggestions to offer? If so, leave a comment and I’ll try and collate them. 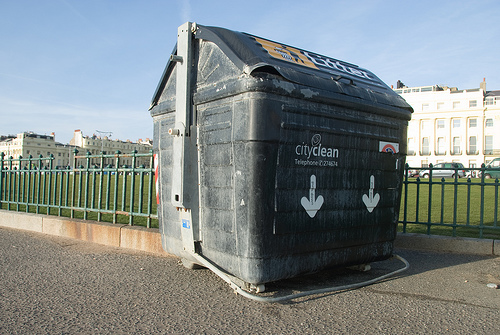 The Communal Bin Consultation has started in the little bit of Brighton we live in. Potentially a good idea, but I think one to reject. If you’re not sure if you’re affected take a look at the map of the proposed and existing bin locations (PDF).

We’re told: “The containers will be emptied regularly to prevent them from overflowing. Where we currently have bins we do not have any problems.” Ah come off it… no problems at all? I’ve seen over-flowing bins, and a good percentage of the one’s I’ve seen are broken (as in the photo above).

But anyway… a dull topic… and one that’s been discussed for a while, and rejected by many. It’s just one of the usual issues.

BTW: there’s a surprising number of photos of Brighton bins knocking around.

This is a test movie I put together so I could discover how to use the 16:9 setting on the camera, to see how to edit with 16:9, and how to export it. I also wanted to see how I’d get on hand-holding the camera on a cycle.

It turned out to be a great lesson, but unfortunately a terrible piece of video. Sorry about that. Here’s what I’ve learned…

In the first half of the film I was cycling with the camera resting on the handlebars, using my right hand to press the camera onto the handle bars. This is bad for two reason: first, I couldn’t signal in traffic to turn right; second, the vibrations from the road through the camera has crippling effects on the recording.

Later I was cycling essentially one handed, which produced smoother film. It also allowed me to try out changing the filming angle.

Other stuff: cycling against a strong wind, while filming, resulting in me wheezing. Combined with the occasional loud sniff makes for some horrible sound. Gah. But it was a good exercise for me in blending and offsetting the sound from different clips—more so later in the sequence than earlier. Oh, and I learned that I need to oil my cycle: some of the squeaks and rattling sounds are embarrassing 🙂

But that aside the 16:9 part kind of works. I had to jump through a few hoops to export the movie into iDVD. Although the 16:9 export from FCE has the right aspect ratio in QuickTime player, it imports to iDVD as 3:4. I don’t have QuickTime Pro, so I couldn’t use the official Apple workaround for this, or Anamorphicizer, so to get round it I had to pull the movie into iMovie08 and then export from that. It works.

Initially I was deeply unhappy with the output, especially when viewed on TV. Then I found the “Deinterlace Source Video” checkbox in the size option box from “File/Export QuickTime Conversion…” (which is where I also picked “PAL 720×576 16:9” for the dimensions). Lots of jaggies in the original, all gone when deinterlaced.

The version here is a result of exporting from iMovie08 using the “Share/Export Movie” menu, and picking the “medium” format.

Today is my third day, or part day, working out of The Werks.

I’m used to spending most of my week working in my own space, to shouting down the phone as loud as I like, laughing out-loud in video chats, playing music, or having complete silence… all that stuff. So why am I trying out a more open space?

The short answer is, I don’t know. The longer answer is that I have a hunch that there’s something special about a bunch of people in a room. Serendipity is the word I’m looking for and it’s a good match to The Werks: “Werkshop is a new concept which aims to provide a supportive environment for new ideas.”

So it’s going to take me a while to adjust, which is why I’m determined to make the effort to get down to The Werks as regularly as I can in January. Only then will I be in a position to judge the merits of being out there…. although, in part, it depends on who else shows up.

In terms of facilities, I can’t see anything missing: internet, electricity, lighting, desks, chairs, coffee, water, doors, windows, cycle parking… it’s all there, it’s been thought about, it all works, it’s all good. It’s not the centre of Brighton, but actually the location is great.

It’s exactly the kind of space a few of us have been talking about for a while, so I’m delighted it exists and is working so well.

Each Friday in January is open to anyone. I thought the first one worked out really well: I certainly enjoyed it. Look for the event on Upcoming and try it out. 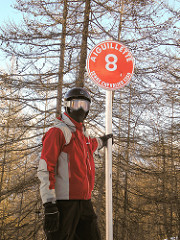 It’s either Richard or the Stig’s little brother!
Originally uploaded by Jane Dallaway

As we have done in recent years, we headed of for some snowboarding over New Year. Our destination this year was Serre Chevalier, mainly chosen due to a) it being a couple of hours drive from Turin and Grenoble, b) having hotels willing to have guests for a few days rather than a full week and c) World Snowboard Guide giving it a 10/10 rating.

We stayed in Monetier les Bains, also referred to as Serre Chevalier 1500, the highest of the villages, in the Hotel Le Rif Blanc. The hotel was on a half board basis with a continental buffet style breakfast and a 3 or 4 course dinner. Our room was small, (for only 4 nights this didn’t bother us) but clean and warm. Monetier was a lovely village, and wasn’t built up and as touristy as other resorts we’ve been to over the past few years. It had a supermarket, butchers, bakers, several bars and restaurants as well as ski and snowboard rental places.

Serre Chevalier as a resort is pretty large, with access along the valley floor by bus to different starting off points, and along the slopes via a series of interconnecting lifts and pistes. There are a lot of drag lifts around Serre Chevalier, but we managed 3.5 days on the slopes without having to go near one without compromising on our coverage of the mountain. The pistes are well marked, like the marker Richard is standing next to in the picture, with a count down from the top of the run to the bottom, and coloured according to the colour of the run – this is the same as the system used in Avoriaz and the Portes Du Soleil.

We’ll probably return to Serre Chevalier sometime, and will again try and base ourselves at Monetier.

This afternoon we spent a couple of hours at The Werks watching the highlights of the NaVloPoMo 2007 project. Some of the films were funny, some were sad, a lot were well thought out with a story to tell.

I used the video feature on my phone and recorded snippets of the afternoon, which I’ve edited in iMovie as a tribute.

I don’t think I should give up the photography and switch to video any time soon :-). Having said that Node 101 is a skill swap style idea to help people learn how to produce video, so if it gets off the ground in Brighton, maybe I should head along. 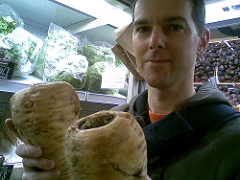 Second, Neela and Ash visit Brighton (which is superb in itself) we end up at Bill’s where we find huge cake: 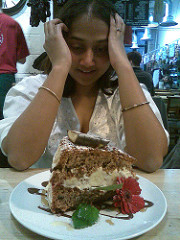 I’ve been noodling around in iMovie for a few years, but there was plenty just bugging me and slowing me down with it. Mostly I found that going back and editing a sequence could really screw up the timing of the whole movie. So the logical thing to do was to move on, and I decided to move on to Final Cut Express (version 3.5 when I bought it).

Here’s what happens: you install Final Cut and all the tools it comes with, fire it up all excited, and… panic. Then get frustrated that you’re doing less than you could in iMovie. Then get depressed. What I did, pretty much the same day I installed Final Cut, was go out and get a copy of Final Cut Express HD 3.5 Editing. I found the book exactly what I needed, with a DVD containing sample projects I could work through to check I was getting the right end product, and a section on moving from iMovie to FCE. Recommended.

Turns out it’s not so daunting after all, but of course I always knew I could just phone Ray…

For six months or so I’ve been grabbing the audio edition of The Economist. It’s superb in terms of quality and mad in terms of size. Each week they churn out about 6 hours of word-for-word reading of the week’s articles (the christmas edition was over 9 hours). That’s a lot of stuff, and they manage to get this out by the end of Friday every week.

It’s not a substitute for the newspaper for a couple of reasons. First, the download is a ZIP of MP3 files (which is fine), but you have to guess if you want to listen to a story based on a rather short file name. I find I can make better decisions on what I want to read by flipping through the print edition. The second reason you don’t want to rely on the audio is that the print and web editions include graphics, which are often excellent. Check out the free daily charts web site if you don’t believe me. 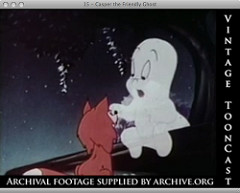 I’m now a happy owner of a lovely iPod Touch and so headed off to the iTunes podcast directory in search of good video podcasts to make the most of my lovely new screen. I’ve no idea how I stumbled upon the Vintage ToonCast but I’m happy I did.

The image is from Casper the friendly ghost, a sentimental cartoon that really appealed to me.

If anyone has any other recommendations for good video podcasts, then please let me know.