The BBC say “work will start on the i360 tower during the summer”. Of course, they said it’d start last June, so who knows… 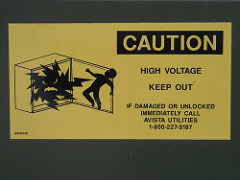 I took this photo in the grounds of the Morning Star Lodge near the Silver Mountain Gondola station in Kellogg, Idaho with the sole intention of posting it to the Stick Figures in Peril group. This I duly did and someone added a tag of Mr Ouch. I was curious about this and so looked at all photos tagged with Mr Ouch and discovered that they are all the same peril picture but with different text, instructions and warnings – a sub domain of stick figures in peril.

I will now be on the lookout for other Mr Ouch warning signs to add to the collection.

We all love TED, and have all probably lost days digging through the video archive. So hurrah for the feed they set up a while back allowing me to just get a constant update of TED videos.

I was going to write a quick pipe to filter out the old stuff and just take 2007 onwards. But I first thought I’d have a look at some of the olders stuff and…oh my gosh, its wonderful.

For example, take a look at Nicholas Negroponte talking about input devices (amongst other things) in 1984. The striking thing, aside from the use of laser discs, is how he describes touch input, including the rolling behaviour for fine input which we now see in the iPhone. And remember the talk was given 23 years before the iPhone was in stores.

(Perhaps I shouldn’t be so surprised, as that’s what the kind of thing he was paid to think about, and the kind of thinking that a year later lead to the opening of the Media lab.)

So I won’t be filtering out the older TED talks. I’ll watch it all, which, now I think about it, is what I knew I’d end up doing anyway.