Many, many years ago, at around the time this blog was starting life, I stumbled across Anna Pickard’s Little Red Boat blog via a colleague’s blogroll (long since gone). I’ve read it ever since, usually taking the time to enjoy her use of language and humour. In more recent years, when Anna was living in Brighton, I met her at a Brighton Bloggers meetup. When she announced, in August, her intention to run a project, named, snailr, described thus:

One journey of almost 7000 miles, six new cities, eight trains, fifteen days, and every vignette, observation and fractured bitty-bit of the travelogue broken up and sent as status messages the old way. By postcard. To a bunch of random people who asked for one. Because travelling slowly is nice. And so is leaving a trail to see where we have been.

On Tuesday, my postcard arrived.
Here is the front of it 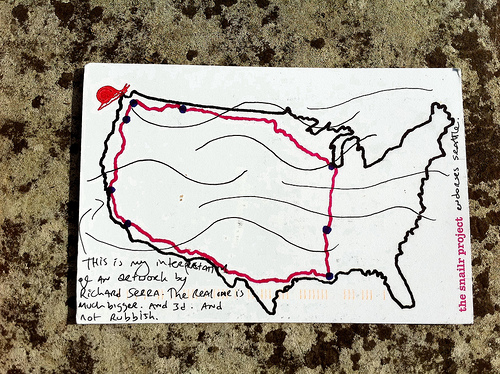 This is my interpretation of an artwork by Richard Serra. The real one is much bigger. And 3d. And not rubbish.

And along the side it says

And here is the reverse of it: 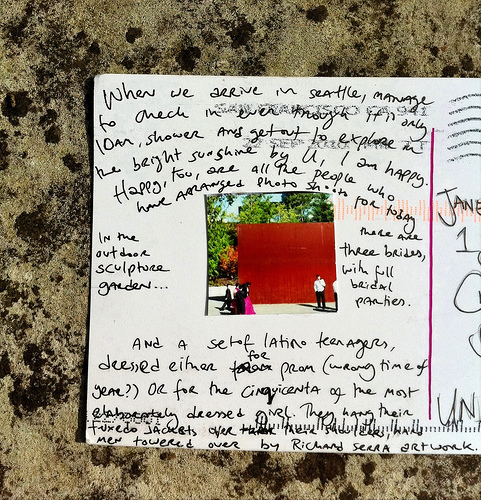 When we arrive in Seattle, manage to check in even though it is only 10am, shower and get out to explore in the brighton sunshine by U, I am happy. Happy, too, are all the people who have arranged photo shoots for today. In the outdoor sculpture garden there are three brides, with full bridal parties. And a set of latino teenagers, dressed either for prom (wrong time of year?) or for the cinquicenta of the most elaborately dressed girl. They hang their tuxedo jackets over their shoulders, hard men towered over by Richard Serra artwork.

As it was a beautiful day today, I took the postcard for a walk to the seaside, here in Brighton, a place Anna knows well, and, as it turns out, is returning to soon.
So, here it is with the West Pier: 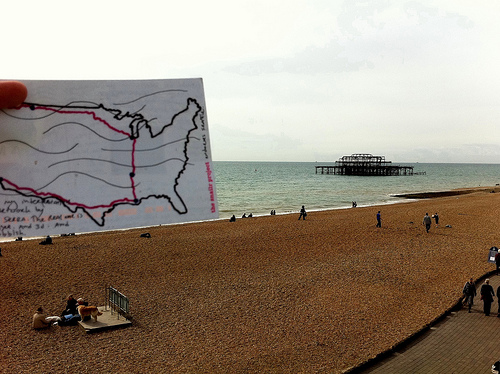 and here with the Brighton Pier: 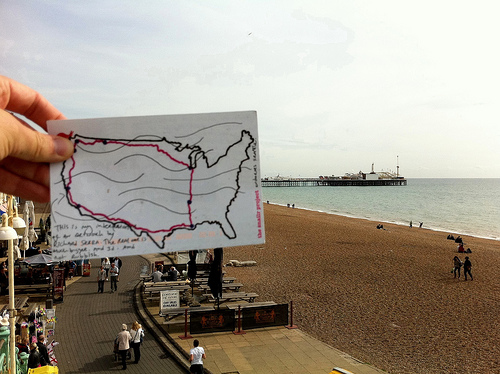