I read Neil Gaiman’s site this morning and learnt that Josh Kirby has died at the age of 72. He was the illustrator who designed the covers of all the Terry Pratchett Discworld books. I can’t imagine Pratchett books without Kirby illustrations, they just won’t be the same.

Brighton is great. Seeing as how we’ve finally got the decorating sorted (well most of it anyways) we can now spend more time exploring our new surroundings. At the weekend we had some great walks along the sea front. We went up to Hove Lagoon and watched some of the people sailing and windsurfing. This got us thinking about giving the sailing thing a try one day. Unfortunately there wasn’t much of a breeze so we didn’t get to take the kite out this weekend, but I have now got a Membership form for the Brighton Kite Flyers so hopefully soon we’ll get some good information about where to go when there doesn’t seem to be much wind about.

On Friday we were eating at Barry’s At The Tureen. As well as having great service and great food, Barry turned out to know our next door neighbours, gave us a phone number of someone near by who could help track down some of the history of our house, and for good measure, told us about the murder that took place in our street this year.

We had friends visiting us yesterday, and as Simes couldn’t remember ever being to Brighton before we decided to go for a wander along the sea front and onto the pier. Steff bought us all a doughnut and we were munching away happily as we wandered along. I was wandering in front of the others and suddenly had my doughnut taken out of my hand by a seagull. It just flew in over my head and grabbed the doughnut, all of it – I’d only eaten one or two bites of it, and flew away. The others, who were still behind me, were probably as shocked as I was, as were various onlookers who could be heard proclaiming “That lady just had a doughnut taken out of her hand by a seagull”. For the rest of the time we were on the pier we kept watching the seagulls eyeing other peoples snacks up, but didn’t see anymore doughnut theft.

Yesterday we made the trip up to the Hammersmith Apollo to see David Sylvian play. It was a good show but I think “Dave” was pushing his luck waiting so long before coming back on for an encore. I think the stage manager was probably telling him to get back out because he had another 20 minutes to do, or something. Luckily there were enough fanatics in the audience willing to clap and clap and clap until he did come out (the guy who shouted “we love you Sylvian” probably shouldn’t be let out alone again…). Oh, the keyboard player was Rowlf from the Muppets. I’m sure of it.

This one is probably a bit sad, but here goes anyway. If you wanted to fly around Mars (hypothetically), you’d get in an aircraft and…fly. Right? Turns out that it’s a bit more tricky. Although the laws of physics are the same, the parameters mean that “all airplanes on Mars are airborne Titanics”. 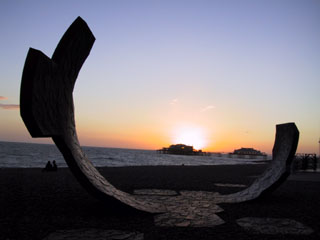 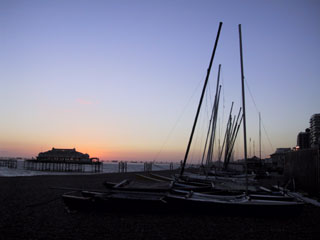 I worked from home yesterday, and got far more done than I would have done in the office (I was writing a functional requirements document and have found myself getting very distracted in the office). I finished up for the day at 6pm and decided to take a wander down to the sea front with the camera to watch the sunset. It was really pleasant just wandering along, watching the lads play on the basketball court, and seeing a load of kite surfers a little way further up the coast. I don’t get the chance to see Brighton in the daylight during the week very often so I felt I had to make the most of it.

If the idea of Kylie Minogue flying around as a sexy fairy seems about right, and you like the thought
of Jim Broadbent singing a baritone version of
Madonna‘s Like a Virgin, then you really should go and see Moulin Rouge! at the cinema. We loved it (Drama/Musical/Romance… but don’t let that put you off).

We went for a bit of an explore in the area around Brighton today. Originally we were going to go up to Devils Dyke for some kite flying with the Brighton Kite Flyers but by the time we’d got ourselves sorted it was raining and the wind was far too strong. We headed off in that direction anyway, and had a quick stop at one of the parking areas to have a look around. The visibility was very low so we didn’t see much although we did see Ashford Forest in the distance (this is where Winnie the Pooh lived in the books by A. A. Milne) . We then decided to drive off to Ditchling Beacon.

As we were driving towards it, we noticed there were a lot of people road running: it was the London to Brighton Road Race. I hadn’t seen any publicity about this and the poor chaps and chapesses had already ran about 47 miles by the time we caught up with them (it’s 55 miles in total). It was rainy and really windy and they were going up some pretty steep hills – rather them than me. It was hard work driving amongst them, trying not to soak them from the puddles (although to be honest it wouldn’t have made that much of a difference to them) and trying not to rev the engine too much when driving behind them.

We left them behind when we headed off towards Newhaven. We went to the car park for Newhaven Fort, and looked down on the sea. We didn’t even get out of the car – it was just too wet and windy. We then headed off towards the West Beach of Newhaven and pulled in to the car park and watched the sea breaking over the wall. We figured we ought to attempt to get some photos of this, so we did, although we both got very wet in the process. 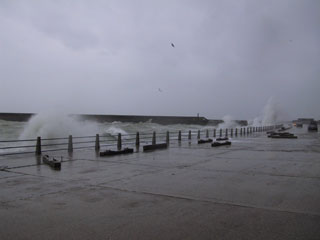 This was definitely enough exploring for one day, so we headed off home to dry out.

We watched the 1978 film “The Thirty-Nine Steps” the other week. We’d recorded it off the TV because whilst we were looking for a house in Brighton, we kept hearing parts of the story being read on BBC Radio 4 and thought we’d like to know the full story (we didn’t hear it all). What was strange though was that the story didn’t seem to be what we remembered. Certain key things had changed (like where Scudder was killed and how Richard Hannay escaped). We weren’t sure which version was correct, so I started to read the text on my PDA. I’ve only read the first chapter so far, but it seems that the Radio 4 adaptation was more true to the book than the 1978 film was.

Interestingly enough, there appear to be another 2 books in the series, as the Richard Hannay books are a trilogy. The other books are Greenmantle and Mr Standfast.