We started the year in New Zealand for just under 3 weeks (and didn’t really get a New Years day). We spent a lot of time driving around both the North and the South Islands, and got a good feel for the country. We had a lot to think about when we came back as we really liked Auckland, and were offered jobs there, this led to the question should we emigrate? The discussions about this went on until at least March, and we ended up going to Wales for a weekend to discuss it more. Eventually we decided not to go as most of our friends are busy producing children at the moment and so wouldn’t be able to visit us. We still plan to return to New Zealand at some point for a longer time, and so we can do some of the exploring we didn’t get to do this time.

In April time we decided it was time to move house, and so we started looking for houses – in Brighton! We’d decided that Brighton had many of the aspects we were looking for in a City.

The whole process of buying a house and selling the flat was painful, and it felt that anything that could go wrong, did. What with management agents who were a bit useless, solicitors who were very, very picky, and a bomb going off in Ealing town centre it took us until August to move.

In July we went to Pembrey in Wales to learn how to parakart. This was really good fun and we ended up buying a traction kite not long afterwards.

In late November, I was made redundant from Aspect, the place where I’d worked for the past 2 years. I got to spend most of December at home doing some geek playing with PHP and MySQL, and managed to find a new job which starts in January (and is in nearby Portslade so I won’t need to sit on a Thameslink train for 3.5 hours per day).

I spent a very enjoyable Christmas in Brighton, and even managed a walk on the beach on Christmas Day.

So, its now New Years Eve and we’re disapointed to find out that there are no special events laid on by the council. So, we’ve had to buy some fireworks from a very knowledgable guy who sold us a selection of rockets and fireworks. We’re planning to let them off down at the beach at some appropriate cold point this evening. 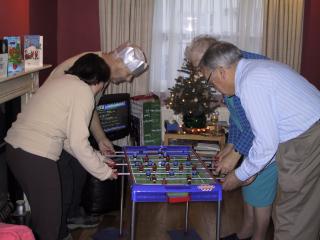 We bought Rich’s Dad a table football game for part of his Christmas present. On Boxing Day he brought it down to our house and we all had fun playing it – including my parents (something I never thought I’d see!).

The guy on the left (without the beard) is my grand nephew, Reece. The main post office in
Canterbury has one of those photo booths which allows
you to get your face on a book of stamps. So Reece did, and the
above is a scan is off the envelope from the Christmas
card he sent to us.

I think he looks worryingly like Calvin (from Calvin & Hobbes).

Richard has been doing some work on the photos section of the site over the last couple of weeks. This has meant a bit of a delay getting some of the photos onto the site. Today I’ve put another 3 albums up. The first is from the 13th December when Joe came down and we had a “photo play day” (too cold really if truth be told). The second are just some shots I took in the Churchill Square shopping centre of the decorations. And the last are from our day out along the coast yesterday with my parents (who have come down for Christmas).

I got a new laptop delivered on Thursday, and mostly installation has gone very smoothly (took Windows ME off and put 2000 on instead). One issue did arise however, and that was to do with the error message “Can’t open ACPI ATK0100 kernel mode driver”. Reinstalling the supplied drivers from the CD didn’t help either (altho it might have done if I had known then what I know now). We looked on google for suggestions, and found a site which had lots of new drivers for the Asus notebooks. I downloaded one of them, and then started the “Reinstall driver” process again. Each time, it still decided that the oem6.inf file in the Winnt\inf folder was newer than the one I told it to look at. In the end, the only way to get this to work properly was to rename the file to be oem6.inf.bak. This time, it looked at the location I told it too, and the driver was installed correctly. Hurrah! During the driver installation it recreated this oem6.inf file so there was no need to rename the .bak version.

I finally finished the Lord of the Rings trilogy on Friday. Finally. After many, many months. Its a really great book and I really enjoyed it, but I think its the kind of book that works best if you can dedicate good reading time to it.

Pah! Last night, after much debate, we attempted to book a trip to Lisbon through LastMinute for 3 days in January. This afternoon at around 5pm we get a call to tell us that the flights are booked up and we can’t go. Can’t be helped I suppose, but what is really annoying is that LastMinute is still showing these dates as available. They offered us a trip to Rome instead, but we really wanted somewhere a bit warmer than that. So, we called up Crystal instead and they’ve found us a trip to Malta. We know very little about the place, but I’m sure it’ll be a nice break before I start my new job on the 7th January.

One of the programmes that Tivo started to record for us as one of its suggestions is Stargate SG1. We ignored them for a while, generally we don’t like the whole film spin off thing, but then decided to give it a go one day when there wasn’t much else worth watching around. And now we’re hooked. Fortunately for us Tivo finds us lots of them, both from Channel 4 and from Sky One (although this does mean that we watch them in a strange order). I’ve just been taking a look through the episode guide and know I’ve never seen any of Season One. Must look out for that some point. And if you’ve never seen any Stargate SG1 it’s kind of a cross between the X-files and Star Trek, and very watchable.

I tried another recipe from the Low fat, Low Sugar cook book today, and made some oatcakes. They taste okay, but I had a real problem rolling them out as almost everytime I put the rolling pin on the mixture, it broke up into pieces. Anyone got any ideas how to prevent this happening? Or happen to have an email address for Rose Elliot (the author)?

I accepted a job offer today. I’m going to be working for a small company in Portslade doing internet/intranet stuff and I start on the 7th of January. Hurrah!

Unfortunately, the news isn’t as good for most of the other guys that I was made redundant with. There don’t seem to be many jobs around at the moment, and there seem to be agencies listing jobs that don’t exist, or agencies that won’t give you more details about a job before you send them your cv – all a bit suspicious.

For the record, here is a list of the job sites I’ve been using, ranked with the best at the top: