EUjet have gone into administration today. Shame, the two flights we’ve had have been great – on time and comfortable.

We had a pretty calm and relaxing weekend. Friday evening involved a few pints and some great food (as always) at The Dorset. And on Saturday we headed off to the impressive Sand Sculpture Festival followed by a couple of cocktails at the elegant Black & White Cocktail Bar at Hotel Seattle. Lovely!

Ever since going to Calcutta, I’ve been experimenting with Indian cookery. I recently bought An Indian Housewife’s Recipe Book which has some great, and simple, recipes in it – current favourites are fresh spinach curry and also beef kebabs (which I use as burgers on the bbq). My only other Indian cook book is Indian Cooking Class which again has some tried and tested recipes in it. Today, Richard sent me a link to BBC – Food – Recipes – Indian essentials which seems to have some good background information, as well as links to some more interesting looking recipes to try one day.

An interesting article on This is Money today about a Cognitive Reflection Test. The questions are:

I had a quick search around the internet, and discovered that I’d got 2 out of 3 right, but I probably wouldn’t have managed that in an interview situation. This might be the logic puzzles I was looking for to add to our interview pack. 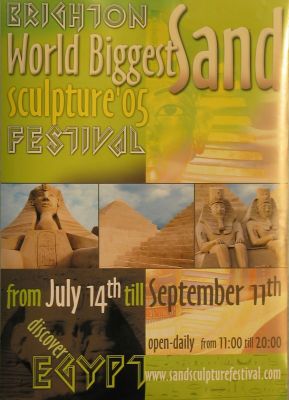 We took a cycle down to the Sand Sculpture Festival this evening. Nothing much visible from outside due to the high fences they’ve put around, but we did manage to get a glance from the main road. I’m sure we’ll head off during the summer sometime and pay the admission costs (£6 for adults, and £4 for children) to go and have a proper look around. 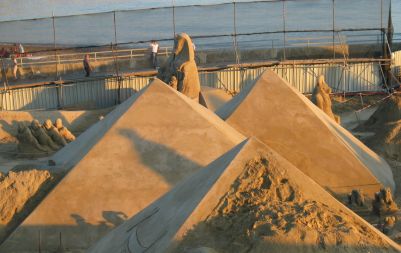 Even after the activities of Thursday, we decided to go ahead with our plans to spend some of the weekend in London catching up with friends. We stayed overnight at Club Quarters Gracechurch street which was really pleasant – and somewhere I can see us returning to. We caught up with Neela, Ste, Ash and Mitül over in Greenford and got to visit both VB & Sons Indian supermarket (discovering all manner of new vegetables) and try some really wonderful Indian and Pakistani food at Five Hot Chillies in Sudbury (nominated for a 2005 restaurant award).

On Sunday, after a lovely stroll over to Tower Bridge, we headed off on the DLR and caught up with Suz and Greg over at their new place overlooking the Royal Victoria Dock in Docklands – a really spacious airy flat with a really relaxing view out over the water.

I’ve been away in San Francisco for a conference. Pictures are now available. Things of note…

The Virgin Atlantic flight was one of the best I’ve been on. The on-demand entertainment was good, but the happy helpful staff made the biggest difference. Being able to send SMS from the plane was fun (US$2.50 to send; US$2.00 to receive), although my message was basically “hey, cool, I’m 32 thousand feet above Greenland!”. It seems like the message really did go at that time — rather than waiting to land, which I would consider to be cheating. Alas, the replies sent never made it to my seat.

Thank you Loren for taking us to Foreign Cinema for dinner. My first Mojito — what a fool I’ve been for missing out on this for so long.

We stumbled into
Massawa on Haight St for some yummy East African food. Must remember for next time.

And finally…. Somehow — and I’ve no idea how — Goul got onto the subject of Fainting Goats. In case you can’t see the video on that link, these look like normal goats, but when they get scared their legs stiffen and they fall over.

It wasn’t until I got home that I realized I’d seen fainting goats in real life on a previous trip to California. I didn’t see them fall over. I think there might have been a sign saying not to scare them.

Putting aside the entertainment value, this was being thrown up as a kind of “you think evolution is good, eh? Well what about these goats?”. And you have to admit that fainting because your scared isn’t a great survival strategy for an animal. At least not compared to running away from a predator. The usual answer to these kinds of issues is that the creature has no natural predators, but it’s different in this case: they’ve survived because they’re fun. New scientist put it like this: “‘It’s odd to think this breed survived as a pet because people made fun of it,’ says Carol Beck of Thomas Jefferson University in Philadelphia, whose team found the gene behind the muscle defect” (These goats may have even made it as “mutant of the month” in Nature Genetics, but I can’t check because I don’t have a subscription.) So there we go: they’re mutants that are fun to have around. Case closed.

There are sand sculptures in Brighton apparently as part of a summer-long sand sculpture festival. I think we’ll have to head off down and take a look later in the week.

Kevan posted a link to an interesting MSG article from the Observer If MSG is so bad for you, why doesn’t everyone in Asia have a headache?. This is interesting, because I didn’t know that headaches are claimed to be a common symptom of eating MSG. I do get headaches when I’ve eaten too much (whatever, too much is) but a recent work meal at Cosmos, Tunbridge Wells left me with a headache and a slightly drunk feeling – and I hadn’t drank anything other than lemonade and water.

I’ve spotted E621 on a few things recently, and wondered if that was MSG as well…

I’ve just booked us tickets to see Stomp in Brighton in October. I booked the tickets online, and it took me 4 attempts to buy the damn things… and then they charged me £1.50 for booking over their “easy internet booking”. Worst online purchasing for a LONG time… Bah!