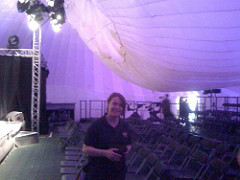 So, the final week of the Brighton Festival saw us at four events: 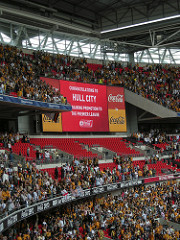 On 6th February 1999 Hull City were at the bottom of the football league, with little to shout about – the club was going nowhere, the owner wasn’t contributing and it looked like Hull City didn’t have much of a future. We were living in Ealing at the time, and when I spotted the Brentford v Hull match I decided that we should go and offer my team some of the support it needed. That started my adult attendance of Hull City games and we won 2 – 0 starting what became known as the Great Escape led by Warren Joyce. Over the next few seasons we attended quite a few of the Southern games including trips to Southend, Cheltenham, Leyton Orient (including for the play offs in 2001), Barnet, Hayes (for an FA cup match), Brighton (at Gillingham) and at the Withdean, as well as some games at Boothferry Park (vs Barnet Feb 2001) and later in the KC Stadium (vs Bournemouth Easter 2003).

I hadn’t managed any games this season – when we were in Hull, the Tigers weren’t, and when they were down here, we weren’t – but both Richard and I had been carefully checking the scores, and were keeping a very close eye on the end of the season.

When Hull made it through the playoff semi-finals and into the final at Wembley I knew that I had to do whatever I could to go (along with every other Hull fan). I was up checking the website at 8am last Monday morning, when the remaining 3800 tickets went on sale (to non-season ticket holders) but failed to get any – I kept selecting them and getting to an error on the website. Aagghh!!

I found some (very expensive) tickets via 1st4FootballTickets and decided that I really wanted to be at the match – the first trip to Wembley for Hull City after 104 years, I couldn’t afford to wait another 104 for an opportunity to see my team on what might be the biggest stage in Europe. I bought the tickets, they turned up without problem and got me access to the ground. Hurrah!

On Saturday we arrived at Wembley at around midday, leaving ourselves plenty of time to soak up the atmosphere and enjoy the experience. I have been to Wembley for a football match only once before, a rather poor 0 – 0 friendly between England and Norway in 1994, and so was keen to experience the “new Wembley”. The walk down Wembley Way towards the stadium was impressive, looking towards the stadium and the arc and seeing the familiar colours of black and amber lining the street along with the red and white of Bristol City.

We made our way into the ground, found our seats and then took a wander around to find a beer. I’ve never seen a Champagne and Seafood bar at a football ground before, but we were in the Club Wembley section which I guess explains it.

The atmosphere was great, and the noise was fantastic – the sounds of the supporters singing just echoed around the ground. We watched some of the warm up, the pre-match fireworks and presentation of the teams before the match started.

I’ve nothing to add about the quality of the football that hasn’t been said elsewhere – Dean Windass’s wonder goal – lots and lots and lots of attempts by Bristol City, but nothing really of power. Boaz Myhill and the defence did a great job and kept another clean sheet.

The final whistle blew, and the Hull supporters (and team) celebrated for all we were worth (I know I had little voice left yesterday). And so, Hull City are in the Premiership and Plymouth get the title of “Biggest town in Britain never to have seen top flight football” – Hull City still holds the title of “Only football club in Britain that has no letters you can colour in” though 🙂

Richard is keen to point out that we’re still on track to meet his prediction of being winners of the Premiership in 2017.

More to come about this later, but in the meantime, take a look at my photos and Richard’s photos

Libby asked this question last November at the Brighton Bloggers meetup. It’s taken me a while to get around to actually answering this question properly, and in fact it might be a better starting point to ask:

Why did I start blogging?

Richard and I started this blog back in March 2001 and back then it was to save bookmarks centrally, to leave ourselves reminders and to keep our friends, overseas or local, up to date with what we were up to. Since then, I’ve started 2 other blogs – Jane’s Technical Stuff and Jane’s Photography blog.

Why separate blogs rather than just one?

Originally, the technical and photographic blogs shared a home with the joint blog with Richard, but it seemed a bit weird to have no separation between work and home. If I documented some feature on my technical blog during the working day, then I might want colleagues to read it, without them necessarily having to search through photos of my garden. The photography blog is the least active of the three, and is a place for reviewing lenses, equipment and for sharing good podcast/vodcasts I’ve come across.

Has the reason for blogging changed?

Sort of, I still blog technically on things I’ve found out, especially if I’ve had problems finding an answer using good old google. I still use them a little bit for bookmarking, but only when I’ve got some extended comments to make about it – otherwise I use del.icio.us. In 2003 I did an interview with the Mirror about being a blogger, reading the extract I took of it shows that actually my reasons haven’t really changed over the past 5 years. 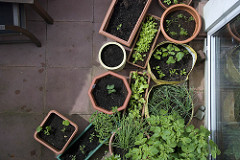 I’ve done much more planting than usual this year. Here are the majority of my pots/containers growing wonderfully. The potatoes have been a bit mad.

It is still Festival time, and as Richard mentioned the other day, we’ve made a real effort to see some of the many fringe shows:

The festival continues for another 10 days or so and we’ve got a couple more shows to attend.

So far we’ve been to…

One negative: the £1 per ticket booking fees are evil, especially as the booking system isn’t finished and the web sites are frustrating to use. And on top of that “internet booking fees” should be made illegal. But, there’s no competition, so we pay. I’d rather have to pay than not have it at all, is what it comes down to.

Transcripts from the Old Bailey (from 1674 to 1913) are now online, which has generated plenty of press.

As I suspect many others have, I went searching for references to my family name and I’ve found a few…

It’s worth having a dig around the site for some of the history to the publication. For example, the Proceedings were popular (“…in the opinion of many people one of the most diverting things a man can read in London”) until the rise of newspapers, and even carried advertising for a while.