Sitting in the office at lunchtime, we looked out of the window and saw 4 chuggers standing around the end of Bond Street. I was intrigued about the collective noun, so tweeted:

what’s the collective noun for chuggers? There are 4 of them huddled around a lamp-post at the Bond Street/North Street junction

Simon came up with:

I would say an irritation of chuggers 🙂

which I rather liked, but Dave’s offer of:

that’s an “ambush of chuggers”

was the one I declared to be my favourite

I don’t remember when I first learnt of Hong Kong, I know it was whilst it was still under British rule. It interested me as a city, in theory at least, being an easily navigable city with lots to see. As we planned our trip to Australia to visit Jono and Anna for their wedding it seemed like a golden opportunity to visit.

We arrived at Hong Kong reasonably early on the Monday morning between Christmas and New Year and made our way to Kowloon, and the Hotel Benito, via one of the airport buses. We couldn’t check in for a few hours so abandoned our stuff and spent some time exploring the area surrounding the hotel and discovering Kowloon Park and it’s free government wifi. 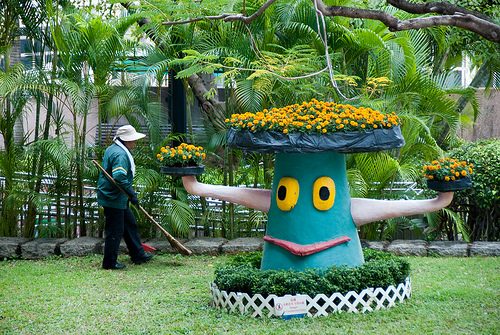 After check-in, naps and a freshen up we headed back out for further exploration, still staying in the Kowloon area, taking a walk down to the Temple Street night market where we found food and beer, before heading back towards the Avenue of stars to take some night photographs of the skyline. 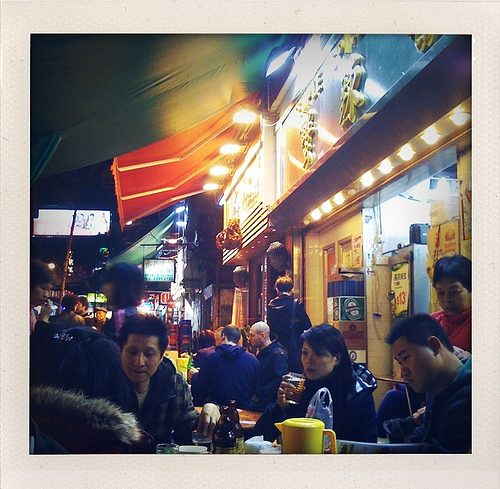 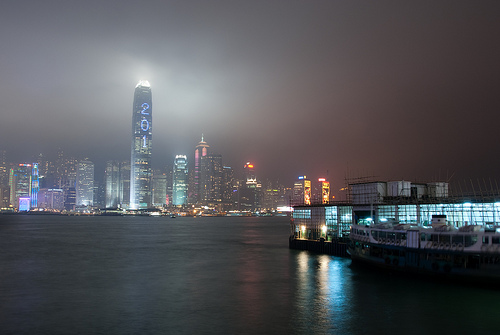 Our only full day started late due to the excitement of Christmas and travelling catching up with us, but after a quick trip to a nearby bakery to feed ourselves, we headed off to the nearest MTR station to pick up our octopus card (pre-paid travel card – similar to an Oyster card in the UK). Armed with our travelcards we headed off to Lantau Island to take the Ngong Ping 360 cable car to see the Po Lin monastery and the Tian Tan Budha. 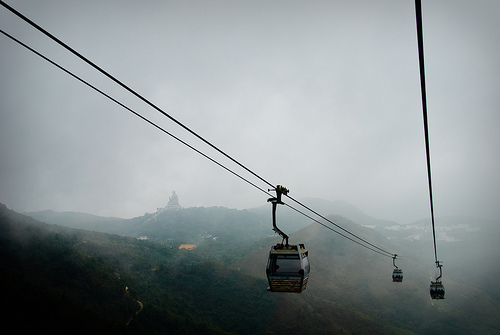 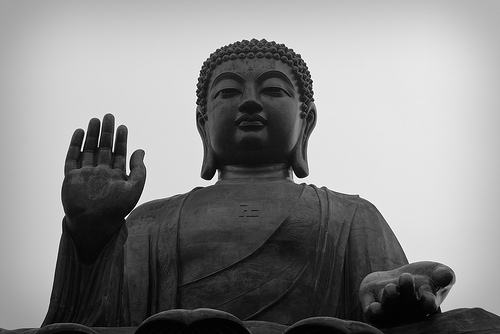 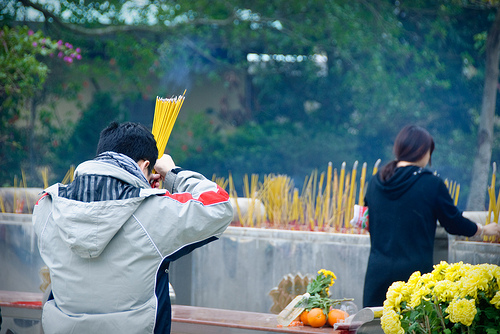 After lunching at the monastery, we made our way back towards town and stopped off at Hong Kong Island for some exploring around that area, including, of course, a trip on the Central Mid-levels escalator and a trip to the Man Mo Temple.

After our fill of culture, we headed off to check out a few recommendations from a friend of mine who lived in Hong Kong for a few years, so took in the Red bar at the IFC before finishing our evening at Lin Heung Tea House for dinner. 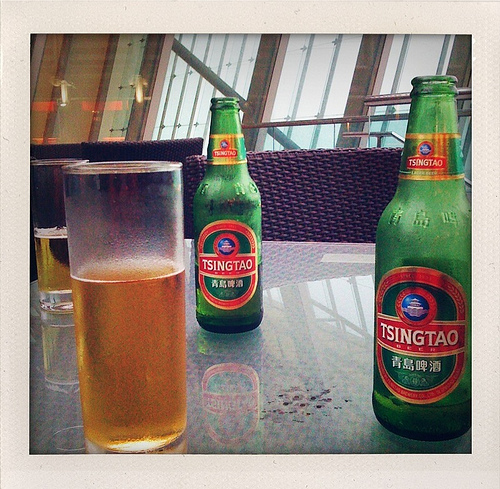 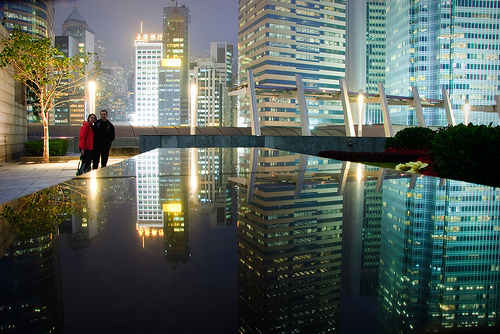 Our final day in Hong Kong, so after another bakery based breakfast and checking out of the hotel (and leaving our bags) we headed off to the 10,000 budha temple as our final cultural experience of Hong Kong, well, if you don’t include food courts in department stores, haggling for iPhone related stuff (case, charger etc) as cultural before getting our bags, getting on the airport express and waiting for our 10pm flight to find Jono and Anna in Sydney (of which more in another blog post). 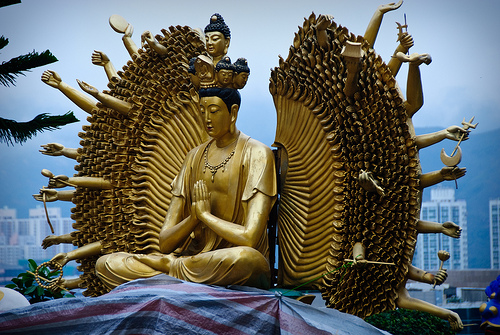 We used an iPhone app as our main guide which turned out to be excellent and was based on the wikitravel Hong Kong information. See Richard’s post for information about which other apps we used.

60 hours in Hong Kong was a reasonable amount of time to see most things – it was pretty cloudy most of our time there, so there was no point in heading out to Victoria Peak. The timing of our visit, between Christmas and New Year, made this even more interesting, as the cultures collide between dim sum, noodle bars and piped Christmas music from every possible outlet. The general cries of “copy watch, copy handbag” and “new suit, new tailored suit” at every corner were accompanied by the occasional jingle bell rendition – most odd. As a stop over destination, I really enjoyed it, and would gladly stop in Hong Kong again. It was everything I’d imagined it to be, an interesting city which, as an English speaker, is relatively accessible without too much difficulty.

During our time away in Hong Kong, Sydney and Tokyo, we decided to use iPhone apps whenever possible to get by. These are the apps we found useful:

We also had TripIt, Dopplr and TripAdvisor apps, but I don’t think we used them.

We picked up one paper guide: at Sydney airport we did a Loney Planet “print and bind” of a chapter of Tokyo from one of their travel guides.  This was so that I had something to use on the flight to figure out what we were going to do in Tokyo in a limited amount of time.  As a bonus, the guide was bound in an anonymous brown card, making us look less touristy if we needed to refer to it.

I started following the Tour de France in around 2002 thanks to sharing an office with an avid tdf fan, Jeremy. A few years later we got to see a couple of stages when it was in the UK. I’ve maintained an interest over the years, and thought I’d share the various media I’m using this year to keep in touch.

Classification View
This is a splash screen showing a yellow, green and polka dot jersey. Clicking on one of them takes you to a detail page. It doesn’t give the White shirt details – which is shame as the UK’s Gerraint Thomas is currently wearing it, but it does show the GC, green jersey and king of the mountains, in each case offering a rider view and a team view:

Stage View
The stage view changes according to whether the stage has happened yet.

Before the stage: gives an expected start time, and highlights the interesting points (mountain points and sprint points)

During the stage: visual indicator of proportion of race completed, information about gaps between breakaway, peleton and any other groups along with a second page showing further details

After the stage (there is a delay between the stage finishing and the data updating): shows the top 3 placed riders in the stage plus the holders of the yellow, green and polka dot jerseys. A second page shows the order the riders finished in, and their time differences.

Calendar View
The calendar view shows a view of about 5 days at a time of distance, start and end points, expected start time and an idea of the profile of the stage. Great for getting an idea of who the stage will favour.

Summary
The application has a few words which haven’t been translated into English, for instance opdated, gruppe etc, but they don’t stop me from following what is going on. The application has also crashed a couple of times, whilst getting updates during the race (it updates at a different rate depending on how much of the race is left). At a price of 59p, these are issues I can live with, but it isn’t quite my ideal app, I would, and have, recommended it to others based on these issues though.

Instead, my ideal app would have:

If anyone knows of an app that does all of what this one does, and my extra bits, then please let me know.