So, again, Hull City find themselves in the news – this time because Brian Little has “parted company” with the club, taking his assistants with him. According to the BBC News story Billy Russell will be the caretaker manager until a permanent replacement can be found. Read the full statement on the Official Hull City website.

There’s a protest going on today against what some people describe as an enormous seafront development which will obscure views out to sea. I dunno, we’ll wait until we see the full plans and the alternatives next month. But the protesters appear to be having a jolly time… see the pictures

I didn’t get to see much of the Olympics over the weekend as we were in Hull (see the wedlog). But, I was really pleased when Dad told me that Britain (okay, Scotland again) had won another medal – this time a bronze for ski-ing. Apparently this is the first British medal on snow. Fantastic stuff. This must make these the most successful Olympics for Britain ever!!!

Well, I sat and watched the Women’s Curling final in the Winter Olympics. I still aren’t sure of the rules, or the strategy and tactics of the game, but by the time it got to 3 – 3 and it was the final end of the match, I was really sitting up and taking notice. For a sport that I’ve never really tried to watch before, it got me pretty hooked – admittedly I wouldn’t have been watching it if it was a British (ok, ok, Scottish) team in the final. But, they won and that was the first Gold medal that Britain has won in a Winter Olympics in 18 years. And, combined with the Bronze medal for Alex Coomber in the Skeleton Bob, this makes these Winter Olympics the best for Britain since 1936!!!

It was a beautiful day here in Brighton yesterday, and so the intrepid cyclists (that’s Paul, Rich and I) went off for a new adventure. We did our first full route from the CTC‘s Trails by Rails collection. We headed off to Falmer by train, and then cycled along some lovely tracks.

The route was supposed to take 1 – 1.5 hours, but we think that the people who measured the tracks were a) fitter than us and b) cycling on less muddy and rutted tracks – in some places it was impossible to cycle as we couldn’t turn our pedals around without hitting the banks of the ruts. It ended up taking us 4 hours to do the trail, although according to Paul’s computer we were only actually cycling for 2 hours of that – we must have had lots of rest time.

We joined the South Downs Way part way through the trail, and got to watch some hang-gliders, paragliders and even a proper glider. As we cycled closer to the Ditchling Beacon car park there were more and more people walking along – I wonder how busy this will be during the summer months! All in all a really good ride, and one that I’m sure we’ll do again. See the photos.

Yesterday was Valentine’s Day, so we treated ourselves to a meal from leapingsalmon.com. This is the “gourmet meal kit” service: you pick the meal you want, and they send you all the ingredients… all of them including little tiny bottles of olive oil, little tubs of sugar — the only ingredient we had to add ourselves was water.

Of course you can buy the ingredients and make a nice meal without help from Leaping Salmon, but it’s a nice treat to have everything delivered in one package for you to prepare. Believe me, we don’t usual start a mid-week meal with tatin of cherry tomatoes (mmm… yummy). We also had the roast salmon with nori and pine nut crust. All very tasty, easy and quick to make.

It even ended up looking like it was supposed to look (more or less):

The only downside is… what to do with all the packaging. 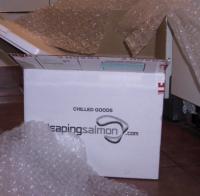 British Eurosport are providing some great coverage of the Olympic games. I’m normally a BBC girl for sport, but they seem to be limited to showing mainly round-up programmes whereas British Eurosport are showing full events (although the BBC weekend schedule looks better). Unfortunately, I seem to have mainly seen lots of cross country ski-ing and definitely haven’t seen enough luge yet.

FAQ about the wedding announcement

Q2. Are you now planning to have children?

We took the bikes out today again and did the same route we did on the 12th January. Today it was a lot less muddy, and was quite mild for February. As we came back along the Undercliff path we stopped and watched 7 or 8 surfers trying to make the most of the waves.

See the photos of today’s adventure.

BRIGHTON, UK, Sat: After almost 8 years together, Richard “glacial” Dallaway
finally got round to proposing to Jane. She said Yes, and there was Joy all
over The Kingdom. We’re looking at a September-ish marriage in Hull. More
news when we know what the hell we’re doing.