Forget the religion aspect: this is an absolute gem.

A couple of weeks ago, in Hull, Jane was introduced to the vicar who christened her. That seems a pretty rare event to me, but extraordinarily Jane’s christening was broadcast on the radio.

In 1972 BBC Radio Humberside were running a show called “In His Name”, and their broadcast of 15 October 1972 was from the church in Hull on the day Jane was being christened.

Back at Jane’s parent’s house we found the C90 cassette that the station manager had recorded of the show. So, gather round, feel the full quality hiss of the tape: 36M MP3 version (or 35M Ogg format, for you freedom lovers). 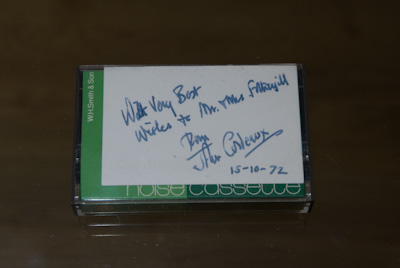