This was our second stop in our Big Trip.

We were concerned at how busy US resorts would be over Presidents Day weekend and so decided to hop over the border into Canada. We wanted to concentrate our trip on places that were hard to get to directly from the UK — what is the point in having a month in the US/Canada if you go somewhere that is a one hop flight? — so that ruled out Whistler. After a bit of research we decided on Red Mountain, British Columbia, and decided to base ourselves there for a long weekend. We flew from Portland, Oregon to Spokane, Idaho and took the Red Express bus service over to Red Mountain. This bus service worked out really well for us and saved us having the hassle of taking rental cars over national borders.

We stayed at the Ram’s Head Inn, a bed and breakfast at the resort, rather than down in Rossland. It isn’t quite ski-in/ski-out but there isn’t a long way to walk to get to the lifts. 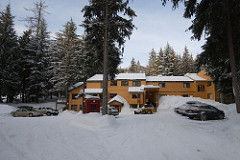 On our first morning we were offered the inn’s free ski passes for the day which is a great way to start a trip. There was a lot of races going on on Red Mountain itself, but having spent a few hours on Red Mountain we decided that Granite Mountain was the one for us — especially the back bowl (Paradise basin) near the struggling Paradise lift (it was on restricted capacity when it was running). There is a really lovely area called the mini bowls on the trail map which is graded blue and which is just spaced out trees with snow in between. This was my favourite area, and started my love for fresh snow and gladed tree runs together. 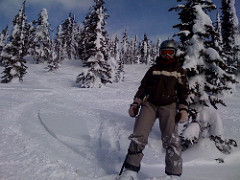 Overall, an enjoyable few days, the unreliability of the lifts caused problems and what lifts were working were generally pretty old. We exhausted all the restaurants during our stay, and if we were to return then we’d probably opt for self-catering rather than bed and breakfast. The breakfast was good at the Ram’s Head Inn, but the ability to cook does give some extra options.

From my sportstracker log, at Red Mountain we did: