Following on from my retro-blog the other week about A week in Filey, I thought I’d follow up with a review of our September holiday in the Gower Peninsular.

As I mentioned last time, we’d seen the Britain’s 10 best dog-friendly beaches list, and there, hogging the limelight at #1 was Rhossili Bay, Swansea which it described as

Let’s start with a real classic. This spectacular sandy beach offers miles of pristine sand at the tip of the Gower Peninsula in west Wales. There’s enough space for dogs to run free and there’s usually a good selection of kites to bark at. The beach even has its own shipwreck – the remains of the Helvetta, wrecked in 1887.

Well that sounded pretty good, and coupled with the fact that Rhossili Bay, and nearby Oxwich Bay also made it into our Time Out Seaside book, a book which had previously resulted in us enjoying visits to Bedruthan Steps, Praa Sands, Kynance Cove and St Ives Bay in Cornwall, and Saunton Sands in Devon, it sounded like an area that we could happily explore for a week. 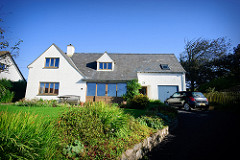 Our criteria for accommodation was similar to last time, dog-friendly (obviously), a decent kitchen (after eating in quite a lot in Filey), a bathroom with a bath (we only have a shower at our house so a bath is a lovely holiday luxury), a garden area and opportunities for walks from the front door. After quite a lot of searching around, we settled on Three Elms, in Middleton. This was a large house, much bigger than our home in Brighton, with a really pleasant feeling to it. There was bookshelf after bookshelf of books, and good books too. The sofa in the living room was long enough to lie out on and while away a few hours reading one of the books, or having a well-deserved afternoon nap. I say well-deserved as most days found us out walking Skitters along beaches, or moors, or both. The only thing we’d forgotten to check was the dog-friendliness of the nearby pub (a 10 minute walk away). It wasn’t, so we ate in most evenings, or stopped off on our way back after a walk. There was also a lack of grocery shopping for anything other than absolute essentials, resulting in us heading to Swansea to find
supplies. The grocery shop at Scurlage stocked enough for us to top up on things like bread, milk and basic vegetables, and the fish and chip shop next door, Chips Ahoy, provided us with a good helping of fish and chips. 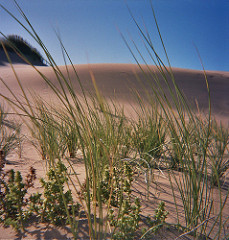 We visited both Rhossili beach and Oxwich bay and can testify to them being beautiful and long and clean. But my favourite beach was actually Whiteford burrows. We approached this area through the pine plantation, walking through trees with sand surrounding their roots and trunks. Really beautiful, tranquil and there were very few other people around. Definitely worth an explore if you’re ever out that way. The scenery is a bit reminiscent of Cornwall, only with all the beaches being much closer together – for instance you can walk between Oxwich Bay and Three Cliffs Bay along the beach when the tide is out, visiting two beautiful areas at once. It is also much less crowded than Cornwall, at least in early September. A week is long enough to visit the majority of the dog friendly beaches, and to take in some really good walks. It is an area that I can definitely see me returning to after a few years for another week of exploration. 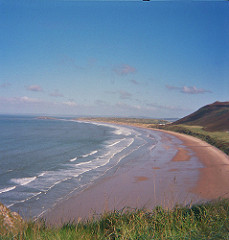 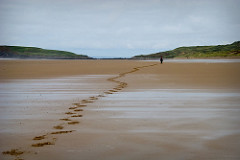 As usual, there are lots more photos on flickr.